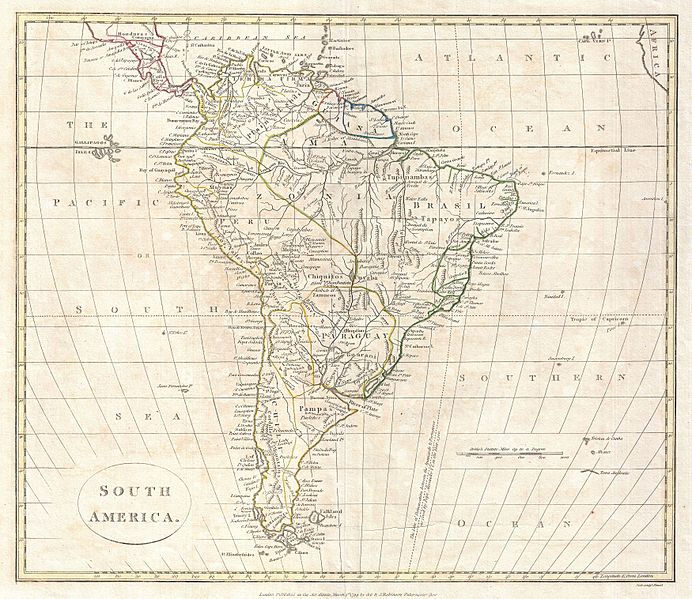 The success and expansion of Portuguese colonial settlements in the regions west and south of São Paulo in the mid-18th century caused increasing tension between the Portuguese and Spanish crowns and opened a new chapter in the two European powers’ competition on the Atlantic side of South America. After decades of rising conflict and clashes on the ground, on 13 January 1750, at the instigation of Alexandre de Gusmão (1693–1753), the most trusted minister of the Portuguese King João V (1689–1750), a compromise was reached between the two crowns through the signing of the Treaty of Madrid (38 CTS 457). The treaty stipulated a detailed territorial settlement. Whereas Portugal recognized the sovereignty of Spain over the Philippines in the Pacific (Article 2), Spain made some major concessions to Portugal with regard to contested areas between the Rio de la Plata and São Paulo. The treaty established the border between the two empires in South America in detail and provided for their cartographic delineation (Article 11) and demarcation on the ground (Article 22).

By the mid-18th century, treaties of territorial settlement between European powers to fix borderlines were not unusual. Nevertheless, the Luso-Spanish Treaty of Madrid takes a peculiar place in the history of international law because it broke with the old regime of Tordesillas and Saragossa that had formed the framework for the Portuguese and Spanish imperial expansion and competition for almost 250 years.

The story goes back to the earlier advances of Portuguese and Spanish explorers into the eastern Atlantic in the 15th century. Already at the time, first the Portuguese and then the Castilian crowns successfully lobbied the papacy for recognition of an exclusive right to navigate, trade, and vest their authorities over the coasts of Africa and the isles in the Atlantic. The first voyage of Christopher Columbus (1451–1506) across the ocean in 1492 formed the occasion for the promulgation of a series of papal bulls by Pope Alexander VI (1431–1503). Through the bull Inter Caetera of 4 May 1493, the pope granted the two Iberian crowns an exclusive right to the outer-European world, dividing their respective spheres of influence by drawing a line 100 leagues (320 miles) west of the Azores and the Cape Verde Islands. Portugal could lay claim to any territories to the east of that line, while Spain was allotted the lands and seas to the west of it. The following year, the two parties amended the bull in the Treaty of Tordesillas (7 June 1494), by agreeing on a different line, running 370 leagues (1,185 miles) westwards from the Azores and Cape Verde Islands. This brought, inadvertently, the eastern shoulder of South America into the Portuguese sphere. After the first circumnavigation of the world, the two Iberian powers agreed on the dividing line in the Pacific between their spheres (Treaty of Saragossa, 22 April 1529).

The papal grant of Inter Caetera was used by both Portugal and Spain to claim exclusive rights of navigation, trade, and colonization outside Europe. These claims were, however, contested by other European powers, in particular England, France, and after the beginning of its revolt against Spain, the Dutch Republic. Whereas the Protestant powers of the north altogether rejected the authority of the pope to make any grants, Catholic powers such as France developed more sophisticated argumentations. In brief, the French position was to acknowledge the papal grant but to interpret it as giving inchoate title. In practice, this meant that the French recognized the legitimacy of Iberian rule over lands they effectively possessed, but denied any claims to exclusivity.

Dutch, English, and French contestation of the Inter Caetera regime opened a wide gap between the Iberian legal position and realities on the ground. The gap had been managed since the mid-16th century by the doctrine of the ‘line’, which held that violent acts committed beyond the line did not constitute a breach of peace among the European mother states. This, in combination with the northern powers’ insistence on effective possession as a condition for sovereignty, vitiated the papal grant’s usefulness for the Iberian powers to defend their empires against other European powers. These had to be defended on the basis of actual possession. This left the grant and the treaties of Tordesillas and Saragossa in place as foundations for the demarcation of the Portuguese and Spanish claims and possessions in America and the Pacific among themselves.

This was ended by the 1750 treaty. Under the treaty, the two powers surrendered the last vestige of the old regime and decided to switch to a concrete delineation of the borders of their empires. Article 1 of the treaty expressly rejected the papal bull Inter Caetera and the treaties of Tordesillas and Saragossa as legal foundations for imperial division. Instead the treaty entailed a settlement of existing claims and counterclaims which was largely dictated by actual possession. The core of the compromise was Portugal’s cession of any pretence to the Philippines, which fell to its side of the Saragossa line, and Spanish concessions to legitimize Portuguese overextension in Brazil beyond the Tordesillas line.

The Treaty of Madrid marked an important departure from tradition in terms of the law, but it failed in practice. The attempt to settle a clear border on the basis of actual possession foundered on discussions over what lands each side effectively possessed. Political changes in both capitals and the international context further conspired to undercut the treaty. After some years of bickering and violent clashes in America, the two governments threw in the towel and revoked the Madrid compromise by the Treaty of El Pardo of 12 February 1761 (42 CTS 57). This treaty, however, did not reinstitute the old Tordesillas–Saragossa regimes but stated that each party would keep its actual possessions. This arrangement did not solve outstanding disputes on what exactly belonged to whom, but served for both parties to preserve their possessions and reserve their rights and pretences pending a definite settlement. At the same time, it caused uncertainty about the status of older territorial compromises, running from Tordesillas to the Peace of Utrecht (6 February 1715, 29 CTS 201). This uncertainty was only very partially lifted when in 1777, after years of violence and war, the two governments reached a new compromise through the Treaty of San Ildefonso (1 October 1777, 46 CTS 321). This new treaty implied a new attempt to delineate the border between the two empires in South America. Although never fully implemented, together with the treaties of Madrid and El Pardo, it offered the context for the Portuguese, and later Brazilian, westwards expansion into the heart of the continent.

Image credit: A 1799 map of South America by the English mapmaker Clement Cruttwell, showing ‘[t]he Line of Demarcation between the Spaniards & Portuguese as fixed by Pope Alexander VI, in the Year 1500’. Via Wikimedia Commons. {{PD-US}}.View a larger version.